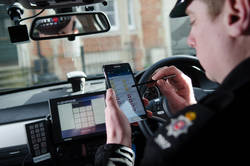 Airwave is pleased to announce that Gloucestershire Constabulary has signed a four-year contract with Airwave to implement the Pronto electronic notebook and suite of policing applications for their police officers.

The initial rollout will see approximately 700 police officers issued with devices pre-loaded with applications that will facilitate the force’s move into a paperless environment, with a further 300 to be issued in phase 2.

The device facilitates remote and mobile access to all local and national backend systems such as the Police National Computer (PNC), Domestic Abuse, Stalking and Harrasment (DASH) forms, collision reports, as well as the force command and control and crime and intelligence systems.

“This is an extremely significant win for Airwave as it means that a third of all police forces in Great Britain have signed up to use Pronto,” says John Lewis, COO of Airwave.

“Gloucestershire Constabulary conducted thorough research into Pronto and its capabilities to see whether it would meet their mobile working requirements. This included visits to some of our existing customers who demonstrated how they use it in their daily operations. The feedback was extremely positive demonstrating that Pronto delivers what their police officers need: a true enabler for the new operational model being implemented by the force,” adds John.

“This software solution will help us to streamline police processes and reduce paperwork enabling officers to be more visible and accessible to the public they serve,” says Neil Mantle, Chief Superintendent, Gloucestershire Constabulary.

The programme with Gloucestershire Constabulary will be managed and delivered by Airwave’s wholly owned subsidiary, Kelvin Connect.