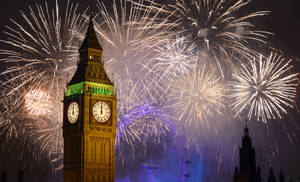 New Year’s Eve continues to record the most concentrated use of the Airwave Network – a 32 per cent increase in calls on the same day the previous year.

“New Year’s Eve is the second largest annual special event that we support during a calendar year, after the Notting Hill Carnival in August. Airwave prepares for the additional demand to the Airwave Network whilst also actively monitoring and managing capacity on the Network in real-time to ensure our customers can communicate,” says Martin Benké, Director Network Operations, Airwave.

New Year’s Eve in London started with a bang with the explosion of some 12,000 fireworks, which filled the sky above London's South Bank lasting 11 minutes. The emergency services prepared themselves for a busy night and Jason Killens, operations director at London Ambulance Service tweeted that they were expecting up to 600 calls an hour.

“Over 100 emergency calls in the first 15 minutes since midnight – it’s getting busy this London NYE.”

Unlike last year when about 500,000 people crammed into part of the city to view the display, just 100,000 paying ticket holders were permitted to watch the city’s annual celebration from a fenced-off area at a cost of £10 per ticket.